5Ks may lead to marathons 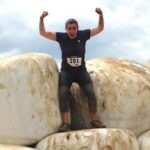 Back in 2013, I ran my first 5K.  While I’ve never been a runner, I decided to run a 5K that involved obstacles because that was more my speed.  Here’s a pic from that race:

Yup, totally looks like I’m conquering all, doesn’t it?!  This race was called Tuff Scrambler and it was done down on a farm, hence the hay bails.  The race was designed to bring out the competitive side in the runners.  If you know me at all, you know I’m a competitive person.  The course was definitely challenging but not over the top, which was good for my first race.  The race has obstacles that are all man-made, has trails through the woods and has more mud than you’ll see at the finest spa in NYC.

How you’re probably thinking, “Why the heck would you want your first 5K to be an obstacle course?”  You’re smart in thinking that because I honestly should have asked myself that too.  But, this was a step out of my comfort zone and it was just what I needed.  After signing up, I became excited and nervous at the same time.  I was in decent shape and just kept telling myself I could do it.  Race day came and guess what, I did it.  I was covered in mud, was soaking wet and had a huge smile on my face because I accomplished something I thought I would never be able to do.

Which leads me to my next venture…a true 5K.  A bunch of coworkers are doing a 5K road race in a few months and I know I’m not a runner.  But again came the call of a challenge.  I signed up to be a runner…yes, a runner.  And then immediately downloaded the C25K app.  For any of you that don’t know what that is, Google it.  If you’re inspired to run or at least begin, check it out.  This is a training app that gives coaching queues and helps you learn how to run a 5K.  It helps you pace yourself and learn how to control your breathing.  And as an asthmatic, this is just what I need.

I’m only done with Week 1 of the program, but in just a few months, I’ll be able to (or should be able to) run 3.5 miles without stopping.  Seeing that goal seems big to me, but I just keep telling myself I can do it.  it’s a goal and I will do what I can to reach that goal. Remember, baby steps lead to big changes in life.

Do you have a goal to run too?  Are you a runner now?  Comment below if you’re just starting out or what tips you can share for a newbie runner.   I’d love to hear about your experiences – both the good and the ugly.  Because who knows, your tips might lead to my next challenge…maybe a marathon…

Get your free eBook all about organizing your life and be the first to hear about all the things!

No products in the cart.